Good evening, morning, afternoon or whatever it is in your corner of the world! With clockwork precision we present you another roadmap update for your favorite racing simulator. And although we are getting closer to the holiday season, we are by no means slowing down! With the release of build 1112, we have a few other updates for you that we’re sharing this month, in anticipation of some bigger surprises next month. Let’s kick this month off with some events, the first one happening this weekend.

We’re really looking forward to the McLaren Shadow semi-finals, especially with some rFactor 2 regulars taking part. Each of the drivers will be competing across a number of different titles, including rFactor 2, so check out the semis this weekend!

You might want to set yourself a reminder so you won’t miss the live broadcast:

January 11th to 14th, rFactor 2 will be present at Interclassics 2019, Maastricht, where we will have two full-motion rigs running the simulation. To match the theme of the event, we will be running the McLaren M23 at the classic Monte Carlo track. On top of giving you this classic beast to drive during the event, we will also organize and broadcast a full race, featuring ten more high-end simulators located at the nearby Adrenaline Xperience center. During the whole month of December, a special promotion will allow you to do extensive sessions in all three historic McLaren cars at a very attractive price. During these sessions, you will get professional feedback on your performance based on telemetry data. The ten best drivers that month will get an opportunity to race against Bono Huis and Xavier Maassen during Interclassics. 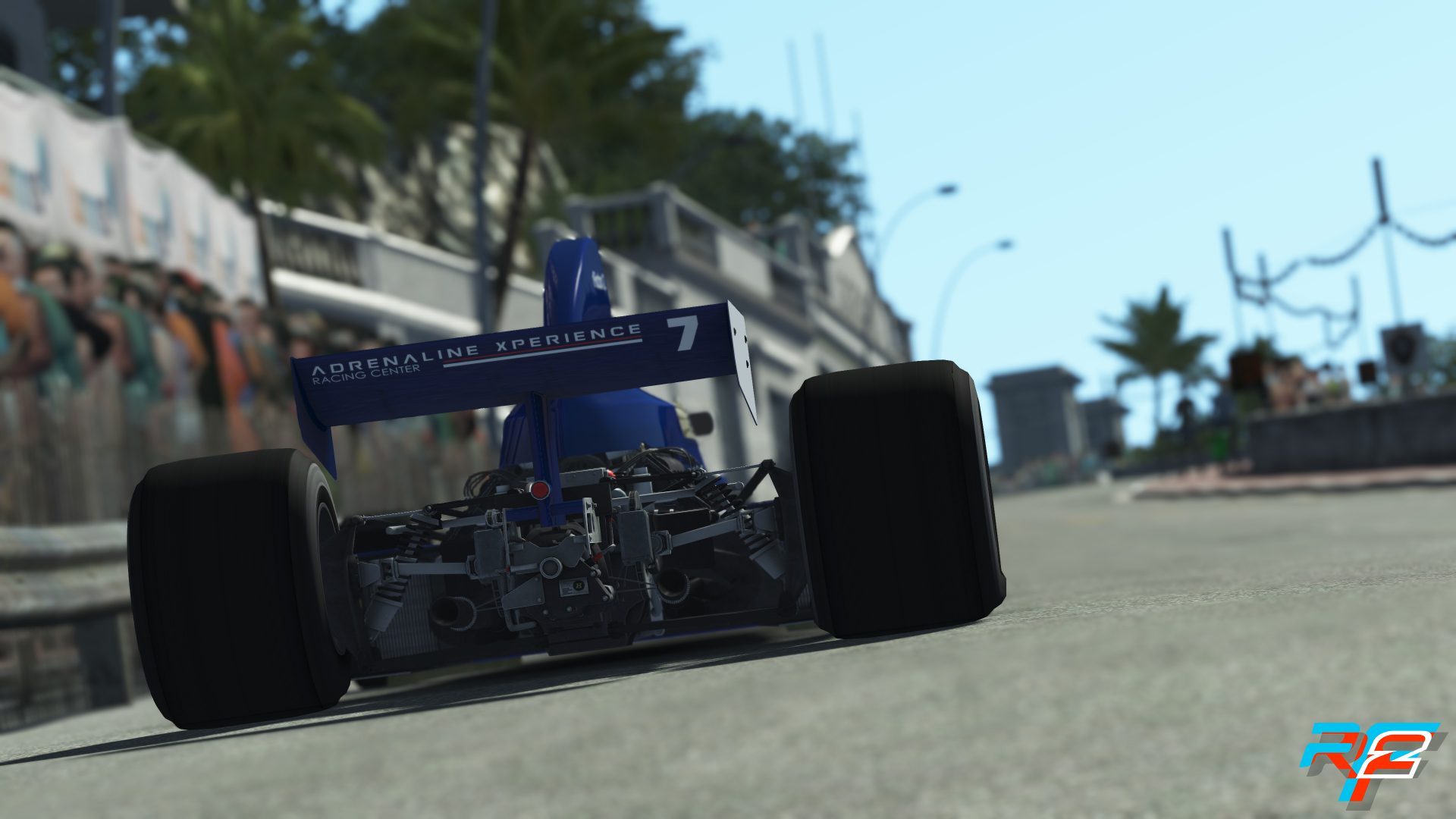 As you may have seen our partners announce already, roughly a week ago, we’ve collaborated with HTC and McLaren to bring a special version of rFactor 2 to the VIVE Pro McLaren Limited Edition. This version of rFactor 2, which allows you to race some classic McLaren racing cars on different tracks, has special “driving” support for the VIVE motion controllers. That means if you own this VR headset, you will be able to experience driving these cars as if the controllers were the actual steering wheel! As far as we know, this is a world first for simracing, and we are proud to bring you this innovation!

Right before the holiday season, we bring you an update to our build with a few fixes and some new features. We made the following changes:

Server administrators must update all dedicated servers because we bumped the version number due to small changes in the multiplayer protocol.

We have added the option to set the maximum rotation of the steering wheel “in software”, so we can adjust the rotation per car even for wheels that don’t support setting the rotation in their driver. This means that current owners of various OSW and SimSteering wheels can now finally enjoy the correct rotation without having to manually set it outside of rFactor 2. The system works as follows: In order to use this new system, you have to explicitly turn it on in your Controller.JSON file (which you can find in your UserData\player folder). The line you’re looking for is called “Steering Wheel Software Rotation,” and if you don’t see it yet, please make sure you have updated to build 1112, run the game once and exit it again. The line defaults to “false,” and you should change that to “true”. The next step is to go into your wheel driver and the rotation to the maximum value it supports, up to the maximum rotation of 1440 degrees that rFactor 2 supports. Then you go back to your Controller.JSON and set the “Steering Wheel Maximum Rotation Default” to the same number of degrees you just configured. If your wheel actually does support us reading the maximum rotation, you can alternatively set “Steering Wheel Maximum Rotation from Driver” to “true” so we will read whatever you set from the driver. We do recommend setting it to the maximum value in the driver, as we can only make the rotation less in software, not more. Finally we have a value called “Steering Wheel Bump Stop Harshness,” which acts like a spring constant and defines how harsh the buildup of counter-torque will be when you go over the maximum rotation for a car. We recommend starting with a value of somewhere between 20 (soft) to 50 (harsh), but this really depends on your wheel and personal preference. For SimSteering and OSW, we added some profiles to our default set as well. You might want to give those a try as they are already setup for this new feature.

In summary, these are the new parameters in the Controller.JSON:

Our competition system is currently being integrated into the new UI. We want to make sure you end up with a seamless experience when joining any competition sessions. At the same time, we continue to extend the core system, making it more plugable and adapted to all kinds of competitions. Some of you might have participated or seen our latest community event, where we ran a simple competition. Expect us to do more of those as we finalize bits of the system and put it through some early access testing.

First off in our early access testing, we will be hosting a short Holiday special, planned between Christmas and New Years. Also, to kick off 2019, we will be hosting events regularly in Q1. Plenty of races and plenty of options to beat your friends – and perhaps even us at S397.

Last month we showed you some early shots of Nordschleife. The team is working all out to complete the track and all track side objects, which is a lot of work given the length of the track and all the different twists and turns. We’re confident that we can show you more updates in the new year!

For the past six months, we have been working extensively on a new material system. You may recall that we showed you some early previews of the McLaren 650S at SimRacing Expo and in a subsequent roadmap update, and we are very excited to tell you our artists are currently starting to work with the system and providing us with feedback on making it even more artist-friendly as part of an effort to start using these materials on our content. We’re not done yet, but at this point we believe we have a very solid foundation to work on as we’re fixing bugs and pushing this system. Just to whet your appetite, here’s a few more shots of the McLaren 650S. 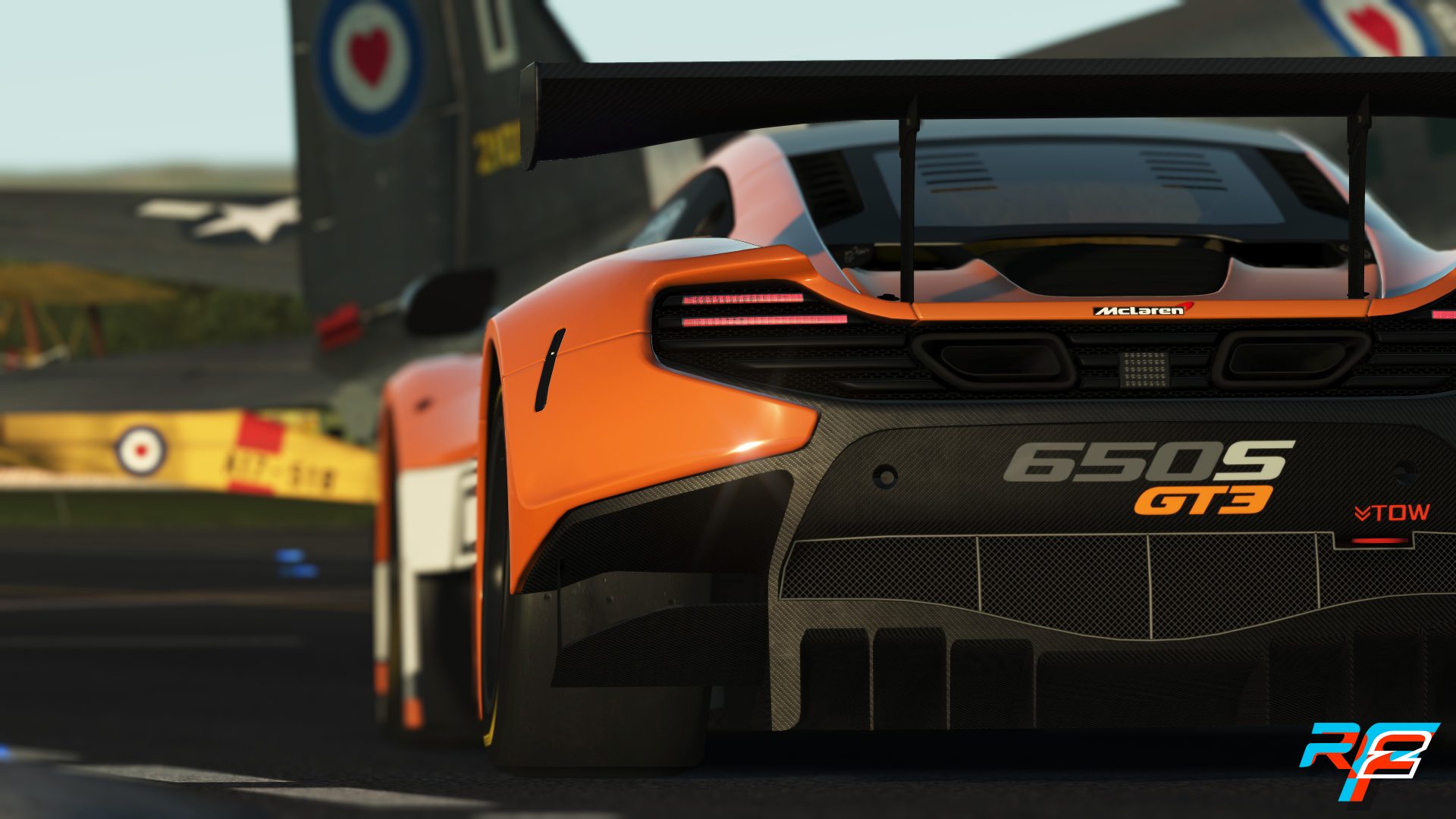 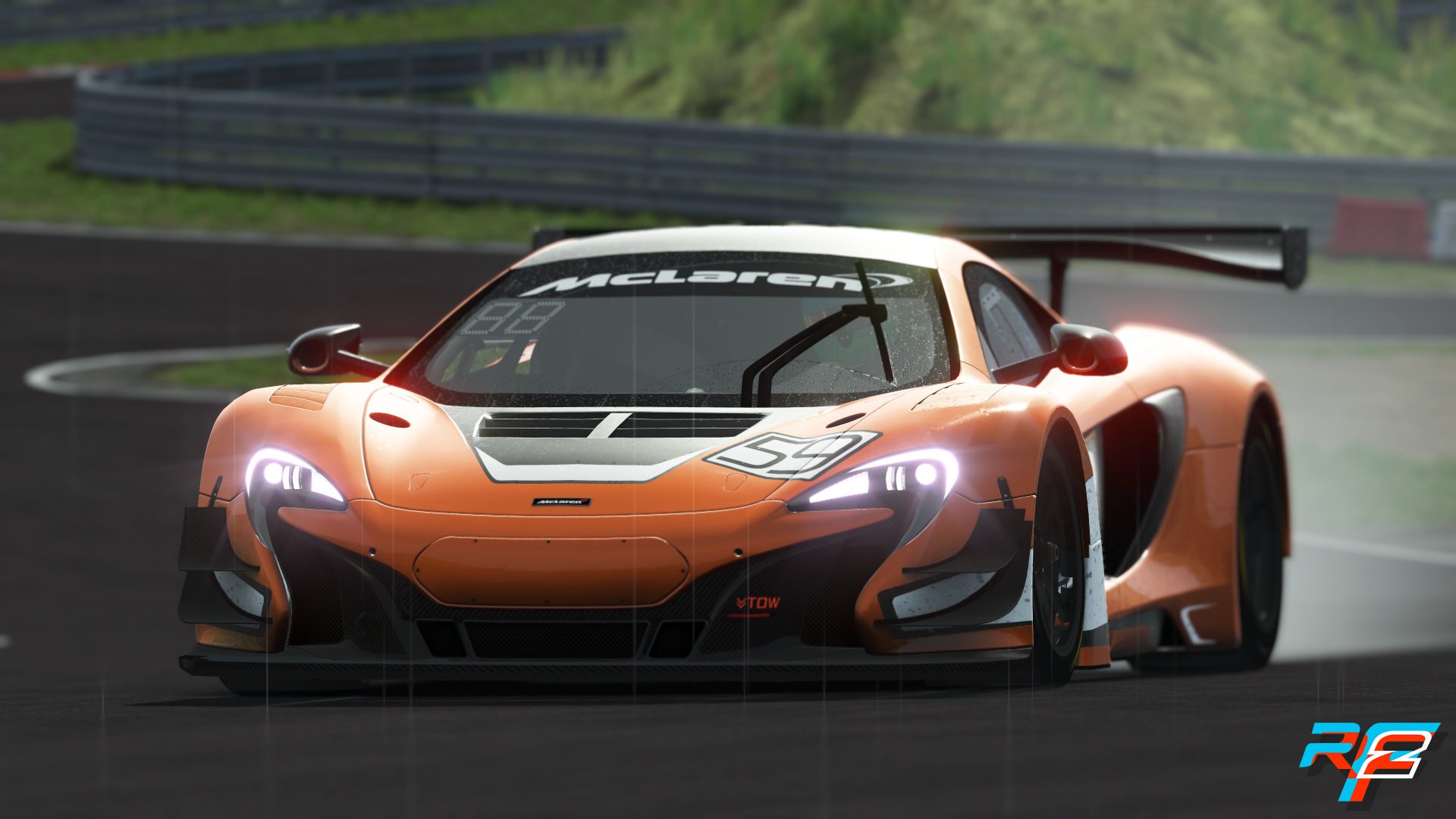 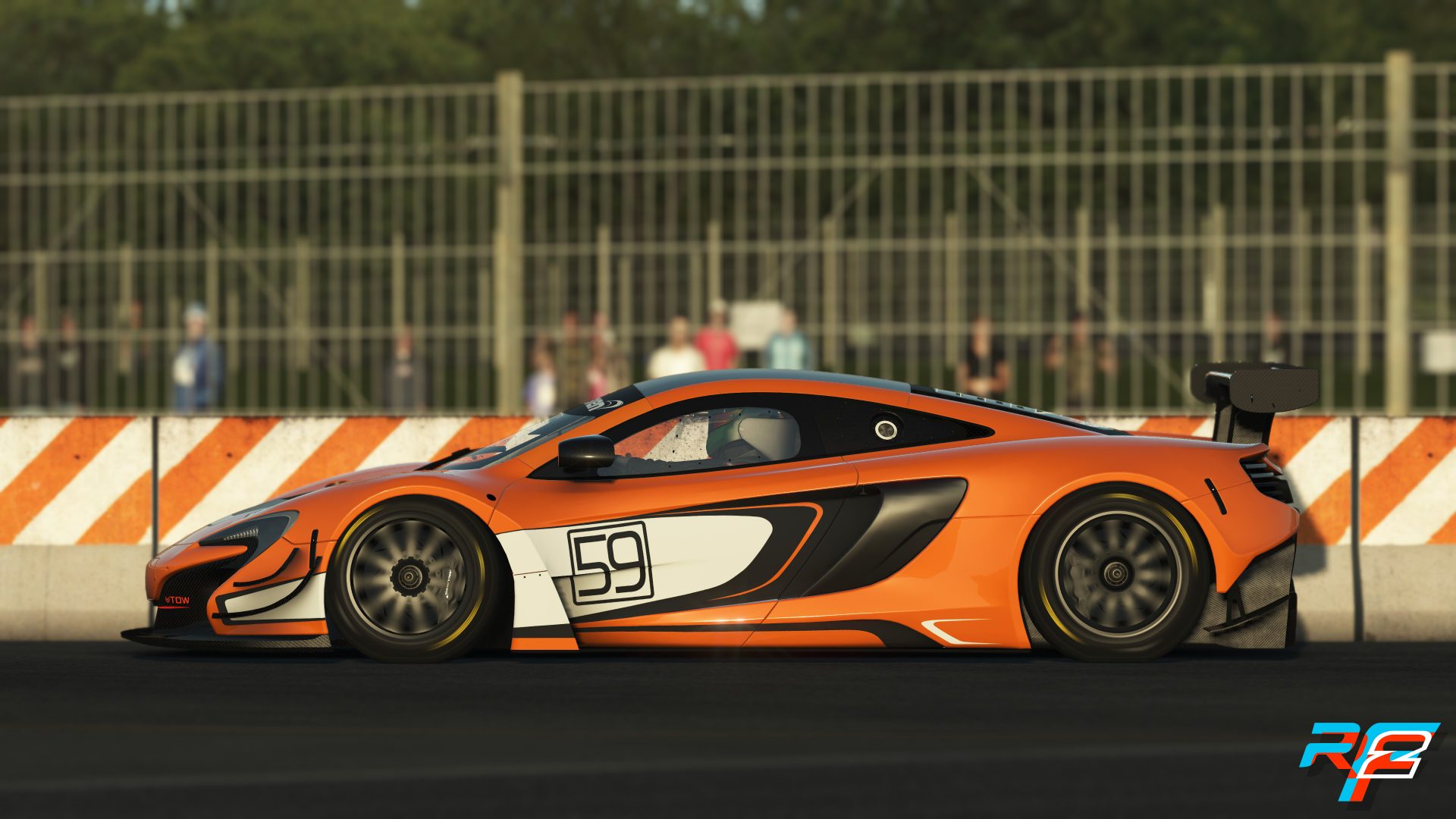 You also deserve an update on the Tatuus license! We are still building these cars, and we can now confirm we will have no less than six different models:

Looking forward to bringing you some very cool toys to play with this Christmas!