It´s getting colder outside, and most of us probably have either switched to winter tyres already or are planning to right now. Brace yourself, winter is here! But as simracers, we’re lucky, our season never ends, so let´s get into this month’s roadmap. It was once again a busy time for us. Let’s be honest here, that probably never ends either: we are pushing rFactor 2 further every single day, but it’s always great to head out to the community with good news like releases or announcements!

In 1989, the gates in Jurva opened to what now is known as the longest and most versatile racetrack in Finland, the Botniaring. It also features different layouts, thanks to the extension of the track in the past from a length of 2618 meter to 4014 meters, making it the longest racetrack in the country. Its smooth tarmac surface has invited multiple races to the region over the years, turning Botniaring into another Finnish motorsport center.

Mostly used for national championships, the track also became popular among northern European championships. With its 3 different layouts, the Botniaring offers thrilling racing action for all kinds of motorsport classes. It might not have seen a full European GT Championship yet, but you can change that in rFactor 2! Choose from the “Long”, “Long with Chicane”, and “Short” layouts to either be challenged by a high-speed track or to take on a breathtaking chicane that needs all your attention if you want to clock a fast lap time. Ah yes, we nearly forgot, the track is live now and servers are also running already, so what are you waiting for?! 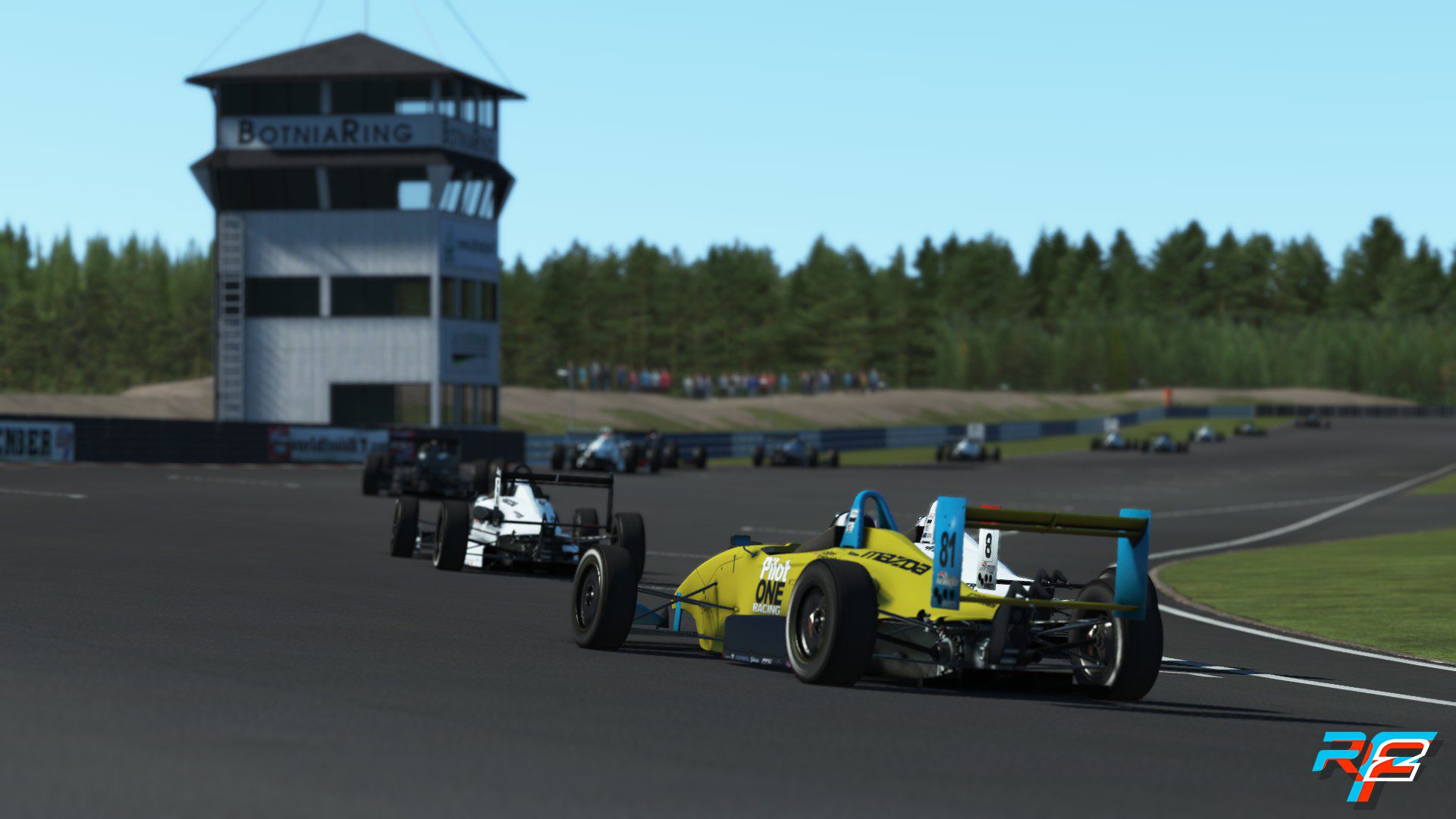 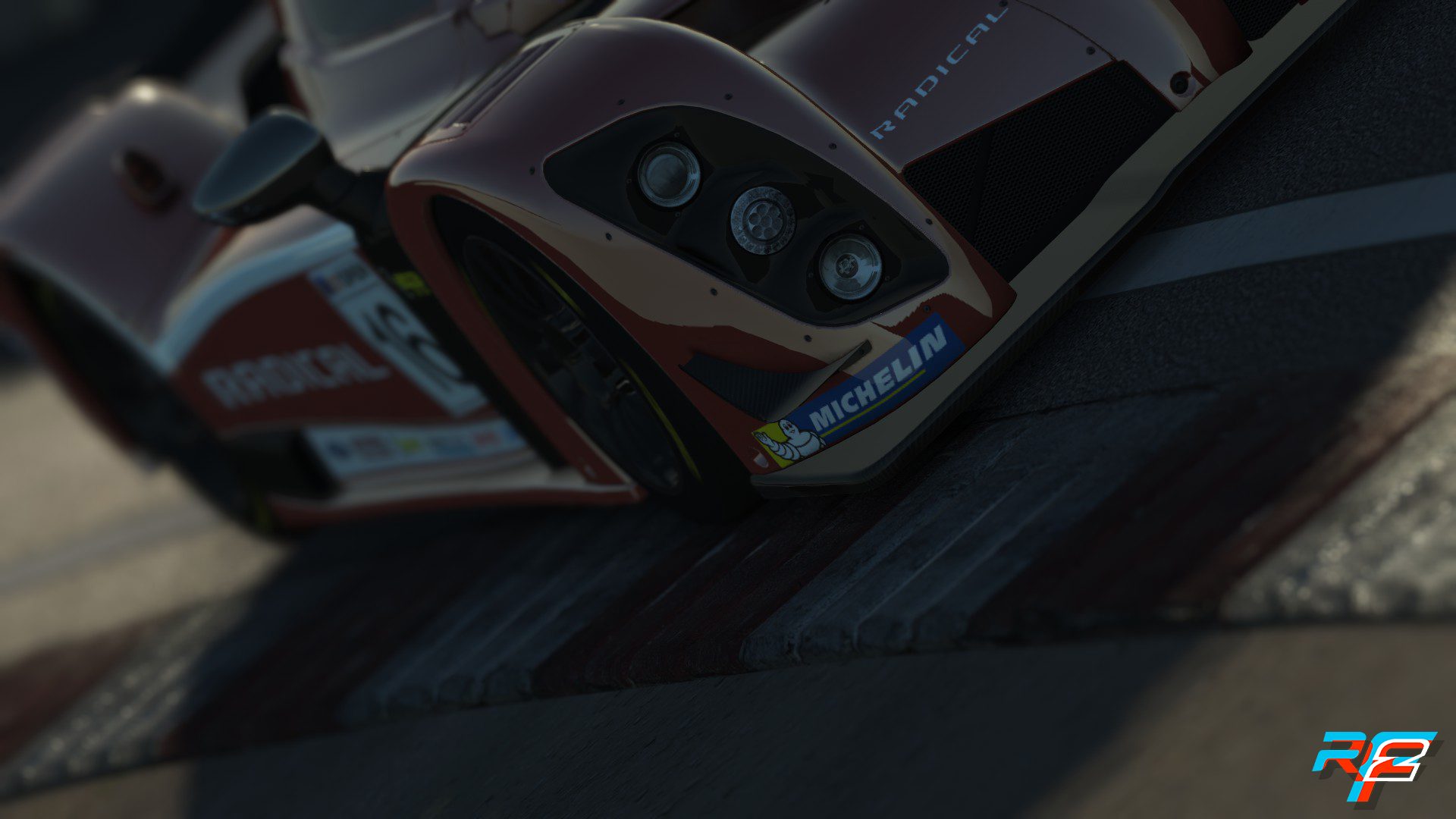 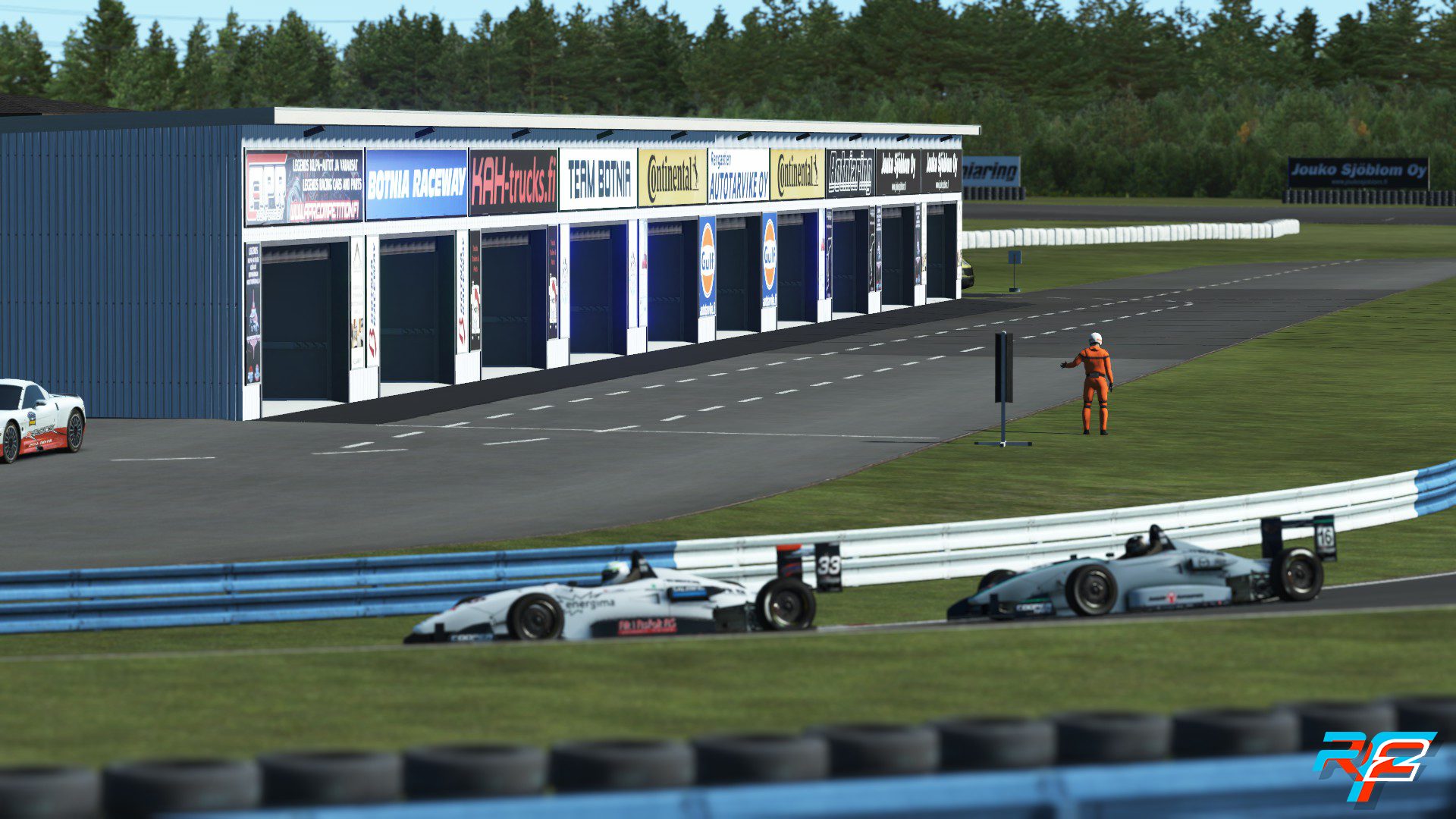 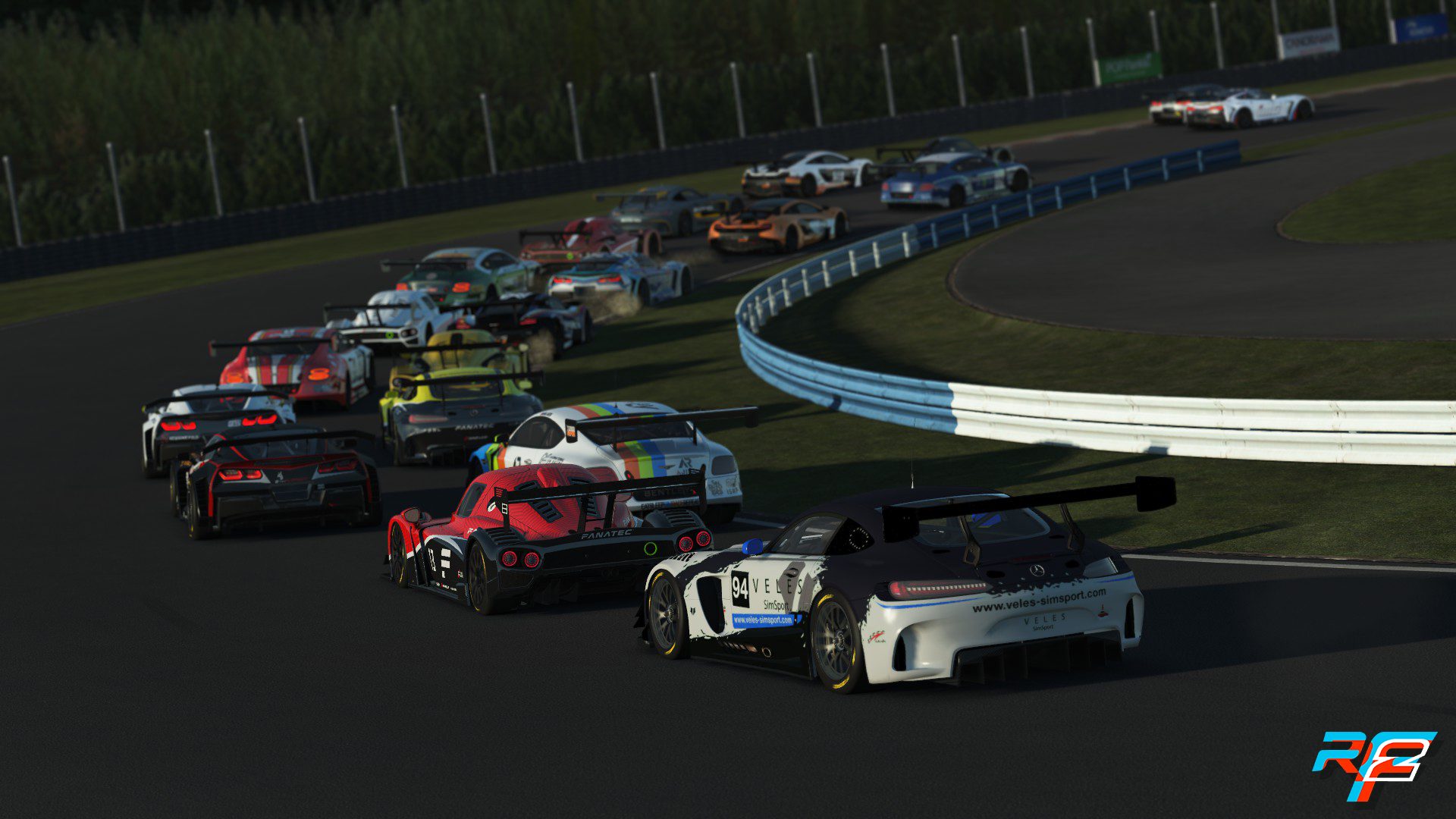 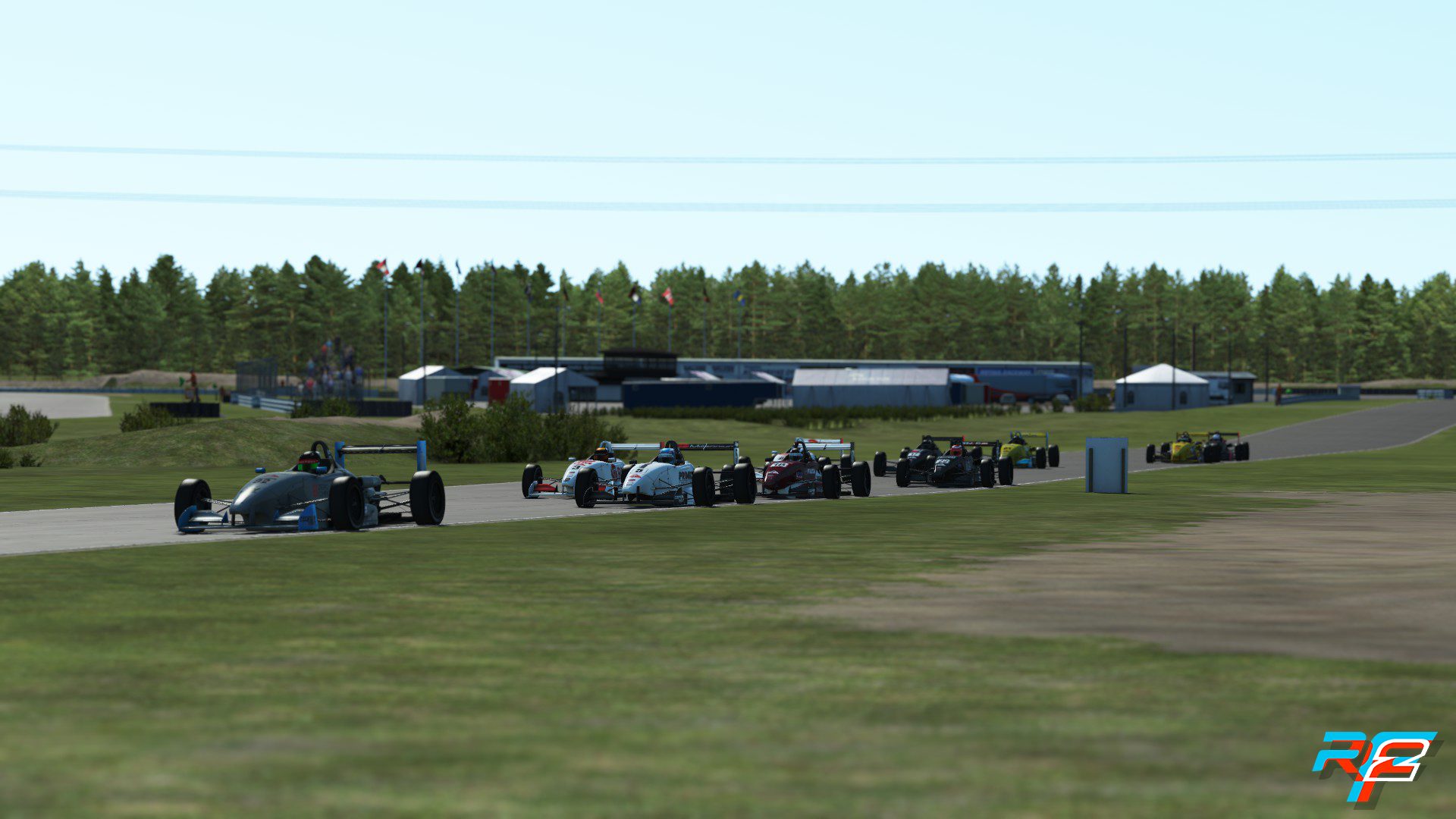 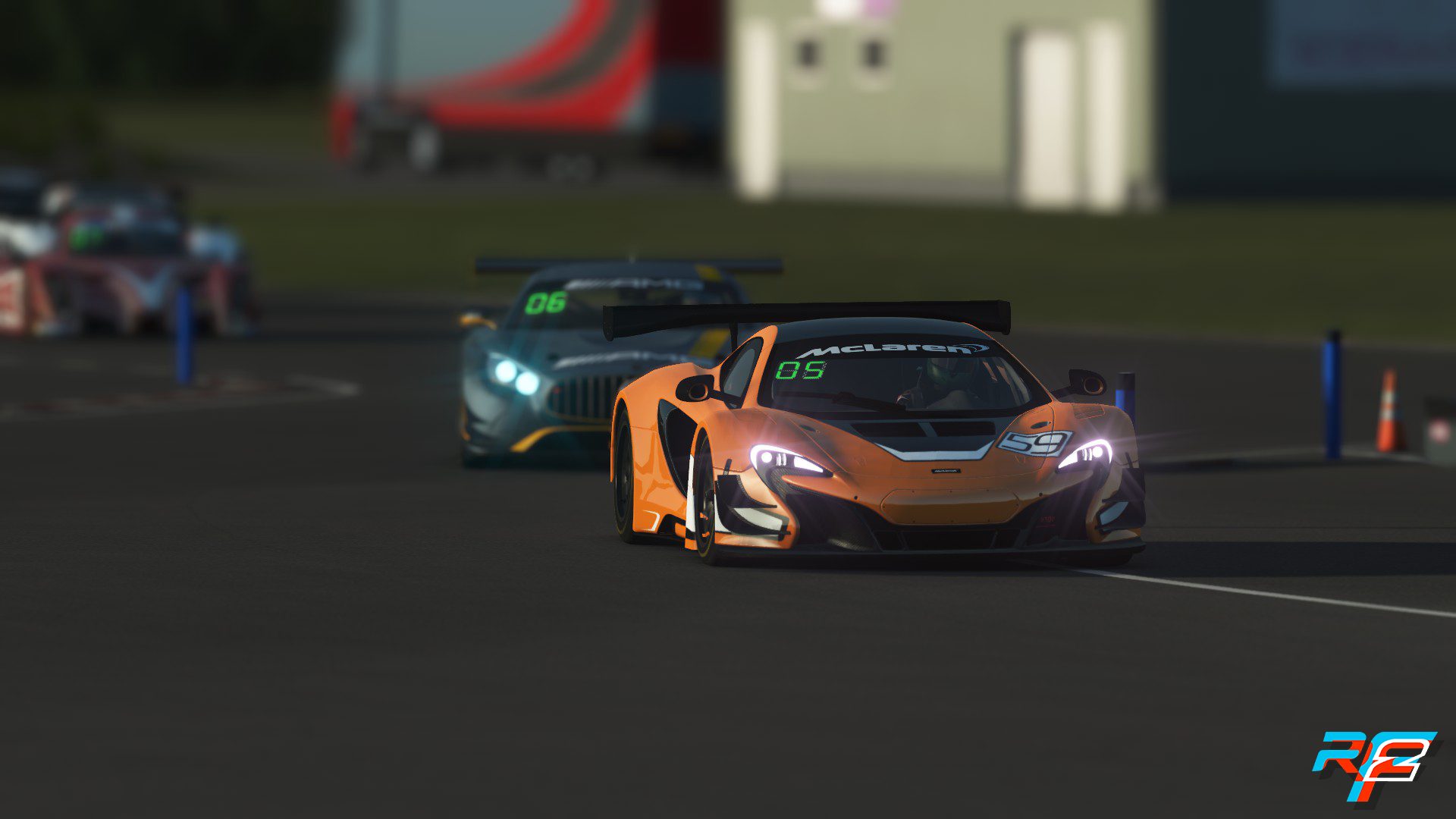 When we announced this track at SimRacing Expo, we already stated this is a monumental task. The 2018 scan data has now been fully processed, and in parallel we have been working on many of the track-side details. We don’t have a lot to show yet, as usually the phases of modeling a track involve a lot of work that is not immediately visible until quite late in the build. We did visit our artists and got some pictures from their workstations while they were working on the track. Planning-wise, we are on schedule, and in a couple of months we hope to be able to show you some in-game shots. Worth mentioning already is that this will be our first full track that is built using our new material system. 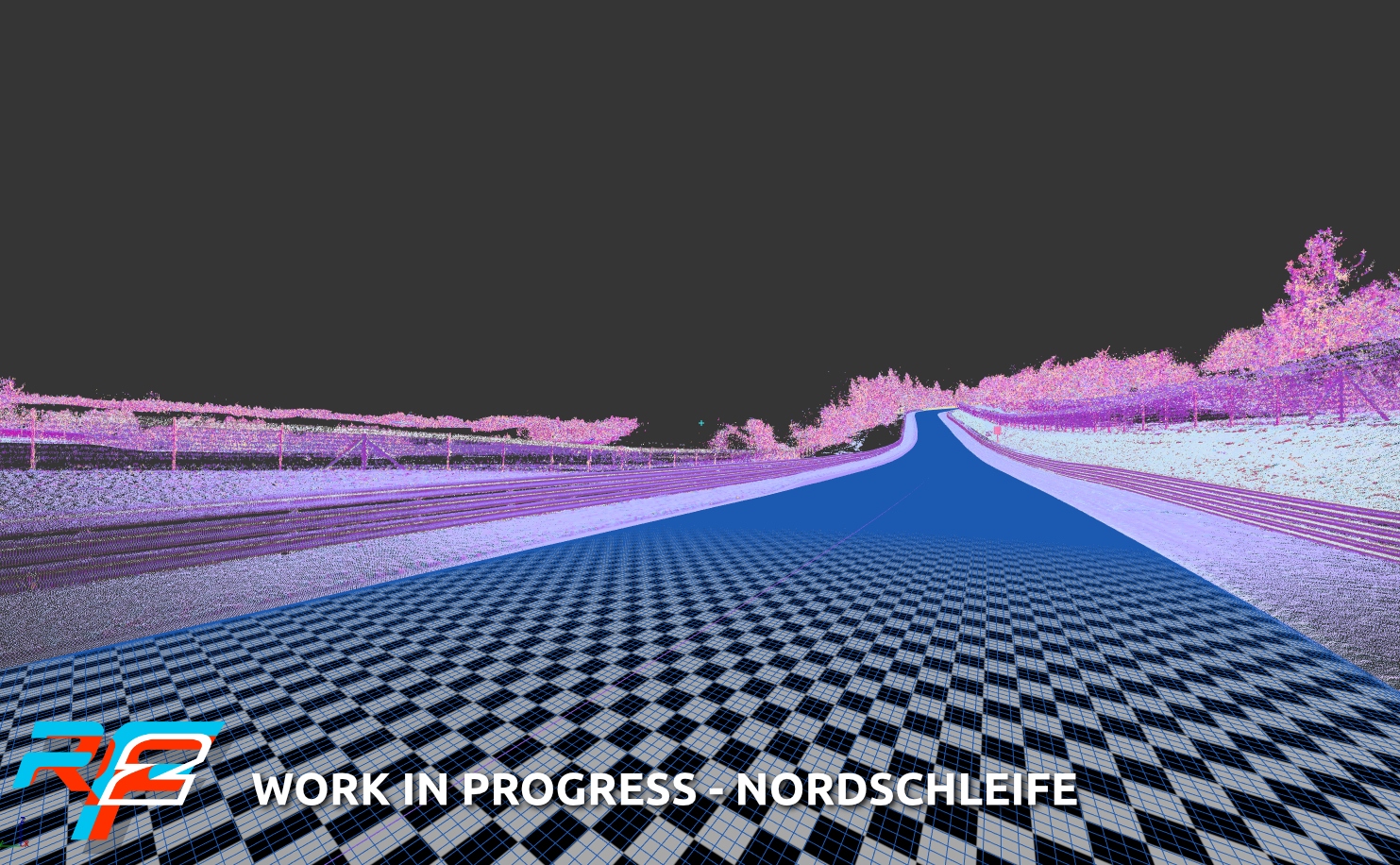 After introducing three new free cars to the simulation, we headed into the harsh but exciting world of competitive racing, on the hunt for that one driver that would represent the rFactor 2 community in the McLaren Shadow final later on in Woking. But before anyone could claim this spot, three qualifier rounds broke down the list of participants to the last 30 that had a chance at winning this.

Round one saw our racers flying through Hangars straight at the iconic Silverstone Circuit in the McLaren MP4/8. With everyone ready to shine and willing to do everything to put their stamp on the first round of the new competition, our livestream saw plenty of action and great fights with everyone trying to get inside the top 10 to make their way to the Qualifier final. After 30 minutes we had our first podium of the rFactor 2 McLaren Shadow Competition with Jan von der Heyde winning in front of Michelle D Alessandro and Eros Masciulli.

The first 10 had their ticket to the Qualifier final, another 20 tickets were still up for grabs. After everyone parked their McLaren MP4/8 in the garage again we went even further back in time with the McLaren M23, a pure drivers car. No electronics, just a steering wheel and pedals. And with these weapons, our best drivers out of the Hotlap Sessions had to go up against each other on Zandvoort. Long fast corners, a lot of banking, and the endless will to fight made up another great livestream during this competition, eventually seeing Georgo Baldi reaching for the top spot and sending Peyo Peev and Kuba Brzenzinski down to the other spots on the podium.

The championship car of Mika Häkkinen, the McLaren MP4/13, was the car of choice for the last qualifier round, leading our drivers to Indianapolis for a last chance to earn their spot in the Qualifier final. With an aggressive rear end, this car meant serious business for our participants and Indianapolis GP wasn´t willing to make it any easier for them. As this was the last qualifier round, everything heated up quite quickly, with several fighting groups that had to be covered by our live broadcast. In the end it was too much pressure for some drivers which totally threw around the top 10 in the last laps of the qualifier. Managing to keep his MP4/13 under control, it was Mark Berends securing the first place with Kevin Ryan and Antonio Kolarec following closely.

Finals at Longford, NOLA and Sebring

All qualifier rounds had been done and it was time for the Top 30 drivers from around the world to face off in the Qualifier final. Due to it being the big finale with just one spot leading to the McLaren Shadow Event in Woking, we decided to send out drivers to 3 different tracks, using all the new McLaren cars to find out who will represent our beloved Sim.

Normally you would expect a write up about what happened, right? Yeah, me too… not gonna happen XD! There was just too much action everywhere and the battles really showed that everyone was willing to give his best to get the Ticket to the UK. So better watch it yourself! (You fancy a link? It’s down there!). To cut a long story short, after 3 intense races it was Nuno Pinto who leading the standings and lifting himself up to the next level of the competition, the on-site final. Nuno Pinto:

It was really good, I wasn’t really expecting to win the competition. The first race was almost perfect, pole position and win. The second race started really bad with the crash on turn 1, recovered from P20 to P9 and got some good points. The last race was so good, started from pole, but when I switched to 2nd gear the rear end stepped out and to avoid hitting the wall I had to lift the throttle and lost 5 spots, recovered to P3 and that gave me overall win. Really happy and I am already working to be in the best shape possible for the final in January, I don’t really know what to expect but I will try and do my best and make all rFactor 2 players as proud as possible!

On behalf of everybody at Studio 397 and McLaren we would like to congratulate Nuno and wish him all the best in the finals! 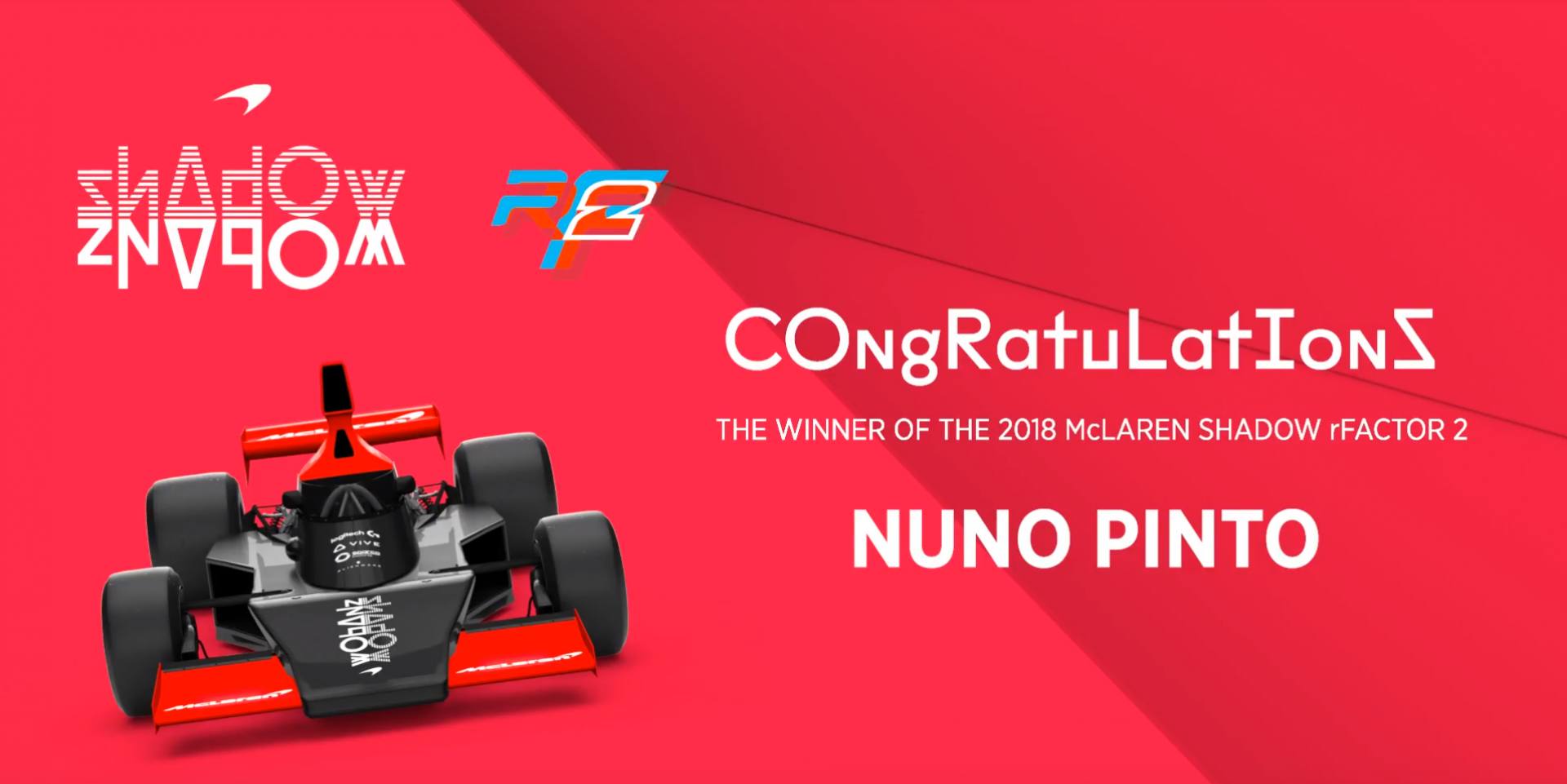 Developer (modder) tooling is an area we have been quiet on for the last couple of years. Internally, and when supporting our community, we have been building on the rather old 3D Studio Max 2012.  Although we released updates that allowed you to work with the 64-bit version of that tool, the fact is that we needed to upgrade to the latest tooling. We are now doing just that, and we expect to release updated plugins for the latest versions of 3D Studio Max soon (they are currently going through internal beta testing). We are also making sure that these tools will continue to work with our new material system, and as always we encourage people to tell us what else they need!

Our month was once again very busy, but we like to drop some hints here and there. So believe us when we say that we are working on way more than what we can list in this roadmap. Yet with all those sleepless nights coding, writing contracts and grabbing licenses left and right, there still needs to be some time left for us to also enjoy our favorite sim!  Right?….RIGHT! Finally that time has come again, and you know its name from previous adventures: the Community Night is back for its 3rd event! Let’s dive into some racing action together on Sunday (4th of November) 7pm CET, to be broadcast on https://www.twitch.tv/rfactorlive

We wanted to celebrate the release of Botniaring and we thought it would be fun to put on our winter jackets and lap the Finnish track with you guys. Deciding on a car class gets harder with every new piece of content we add, so why not just race 2 different layouts with different classes? We will hit the short version with the USF2000, while the roaring GT3’s will conquer the longest ribbon. You can now go for your first laps on our Botniaring servers that are live with the launch, so get ready!

That’s all folks, and don’t forget we are still in the middle of the Halloween Sale, so check out our special offers!!!